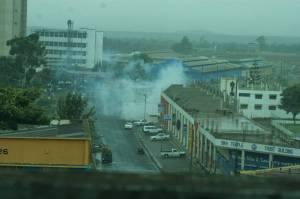 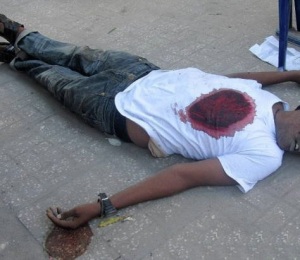 The news that came out of the Town of Arusha in Tanzania last year was very unfortunate. The Tanzanian police force and its Field Force Unit (FFU) have been using excessive force for years. In the late 1990 a score of innocent citizens were beaten and killed with live bullets in Magomeni, Dar-Es-Salaam. In the early 2000s, several incidence of police brutality and killings of innocent citizens were circulated through youtube videos and in international news channels all over the world from an election that had gone sour in Zanzibar. Last October, several innocent villagers were killed in Tabora, Arusha, Morogoro, Songea and now Iringa.

This shows a pattern of orchestrated events and it is not isolated as the President want us to believe.

I am calling those killed innocent citizens just for the mere fact that they were not convicted beyond any reasonable doubt in any court of law. Demonstrators of any kind should be afforded their day in court to prove their innocence without being shot at as criminals. The main job of the police force is to protect citizens and their properties, to arrest individuals and hand them to the court system to prosecute them. Not to render justice.

It is due time for a new constitution, a constitution that will allow the balance of power….giving individual citizens the right to sue the government when they are wrongly killed, wrongly removed from their land and wrongly maltreated by their own government. Tanzania has in the last 20 years been pursuing capitalist economic policies, therefore the constitution need to reflect those policies as well. We cannot continue to be a socialist country, while all the economic sectors prescribe to a capitalist ideology. Let’s just call a spade a spade and pay dues to the wrongfully killed or injured.

The grabbing of land in the Rufiji Basin by the Tanzanian and the South Koreans government sets a horrible precedence. The so-called idle land, unused land by the Tanzania official Mr. Masanja. This land will come back to haunt the people involved. At-least be truthful to your own people when entering these kinds of joint ventures….so that they can be rightfully compensated and to avoid future land conflicts.

I will look at the land issue in more details in my next piece……..please come back and leave a comment.

Below you can read Kitwete’s regret statement over what happened in Arusha.
By the NewsTimeAfrica.com

Tanzanian President Jakaya Kikwete has expressed deep regret over recent violence in the country’s northern town of Arusha where four people were killed by police fire during an opposition rally.
”This is very unfortunate. I believe it is an isolated case and the government will make sure that harmony is restored,” Kikwete told ambassadors and heads of international organisations based in Dar es Salaam late Friday.
”We will make sure such incidents never happen again. This is the first and should be the last of its kind to happen in our country,” he said at a New Year’s party he hosted for the envoys at State House.
On Wednesday several leaders and supporters of the main opposition party, CHADEMA, were arrested after an anti-government protest and demonstration. On the following day they were charged with unlawful assembly before a resident magistrate’s court. They were released on bail. ”While pursuing the law we will not be oblivious of other avenues to restore harmony,” Kikwete said.
Kikwete reiterated that October 31 elections had been generally peaceful. ”Democracy is taking root and becoming more vibrant though still fragile,” he said, adding: “I am delighted with the election in Zanzibar and its outcome. ”Last year’s polls were smooth. Zanzibar is calm and peaceful.”
Kikwete also expressed concern over the situation in Madagascar, Somalia and Ivory Coast. ”I hope President Laurent Gbagbo will see reason and heed appeals by the UN, African Union, African leaders as well as other world leaders to respect the will of the people (Ivorians),” he said. He further talked about Southern Sudan, saying the forthcoming referendum will determine their destiny and that of Sudan as a whole.

2 thoughts on “From Arusha Killings…. to Mwangosi!”