I was born and bred in a small town in rural Tanzania, and all I saw around me as I grew up was poverty. I saw a peasant who always worked hard in his small farm but could not transport his produce to the market because the roads had not been repaired since the British colonial government left in the early 1960s.

For orphans who hoped to get school uniforms, books and school fees from grassroots religious charity organisations, which paid for the education of over a thousand children in my home town, rains and impassable roads meant that even the most generous and caring of charity workers could hardly reach them.

Expectant mothers would walk for hours on end to reach the nearest health centre, where they badly needed the services of midwives and other experts. Some had no option but to give birth in the open – on the roadsides -before reaching the village dispensary. 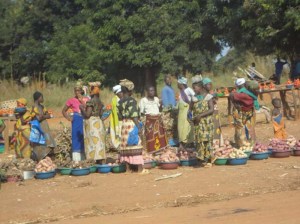 Women sell their products along Kasulu-Kibondo highway. Their experiences show how Tanzania still has a long way to make aid work for poor people.

Those lucky enough to reach there would sometimes find the only nurse at the village health centre gone to a distant village to visit other mothers. During those few times she would be around, she seldom helped the mothers because she lacked proper training and was without the facilities needed to take a mother through safe birth.

That was more than twenty years ago, long before I could call myself an adolescent. I am now an adult – and a journalist. My work entails visiting rural families frequently to write about their lives. I stay in poor people’s homes while there, squat with them around a plate of boiled potatoes and greasy wild vegetable soup.

I would sometimes sleep in their small huts, where the air was filled with the stench of goat urine. The ruminants would bleat into my ears all night long. It is from such experiences that I have discovered the bitter truth about the little aid can do to change people’s lives.

In these particular cases, what the aid had done was to widen the gap between a poorly starving African and a beer-bellied senior civil servant entrusted with donor sponsored poverty reduction programmes.

Sometimes a ten-classroom school would be built. The cost of each classroom would officially be put at $6000 or thereabouts, but it would be built with half the amount, the balance going into the wrong people’s ever hungry pockets. A year later, when the long rains set in, the school buildings would start crumbling.

Senior civil servants overseeing the construction of a number of such schools in different parts of the country would write sweet reports for consumption by unsuspecting donors. The officials would pay themselves a daily $100 or so each per day for attending meetings to deliberate on the future of school construction plans, the meetings being conveniently held twice a week.

Those involved in the implementation of the projects would compete against each other in buying ultramodern Toyota Land Cruisers, Japanese brand fuel guzzlers that not honest civil servant in a poor nation could afford even if it meant hoarding a whole lifetime’s salary.

One of them would happily shout at a pub how he near effortlessly he would pay a staggering $30,000 the following week for his son or daughter to study at a prestigious university in London or South Africa. He would do that while juggling his Iphone in one hand and a Blackberry in the other.

The conversation would be incomplete if he forgot to brag about his plan to buy a new house in a posh neighbourhood for his newly found long-legged mistress, a mere 20 years old. “Small change” coming to a few thousand pounds would then be deposited in an offshore account somewhere in Europe or the Americas.

President Jakaya Kikwete of Tanzania, a popular name with the West, admitted months ago that about 30 per cent of the government’s national budget got “lost” through corruption and embezzlement. He was in fact talking of an amount equivalent to the country’s annual budget support, a warning that the system in use had serious shortcomings and called for urgent review.

As the leaders of the world’s richest nations devise ways to meet their historic pledge to double aid to Africa, the must also think of coming up with comprehensive plans on how to make aid work better.

They need to help strengthen local councils and charities at the grassroots not only to a competitive wage but also to hold leaders who misuse aid to account. This could help end the embezzlement or misuse of their taxpayers’ money.

One thought on “Foreign Aid is Fuelling Poverty.”